Meals with Midgi: When a taco isn’t just a taco 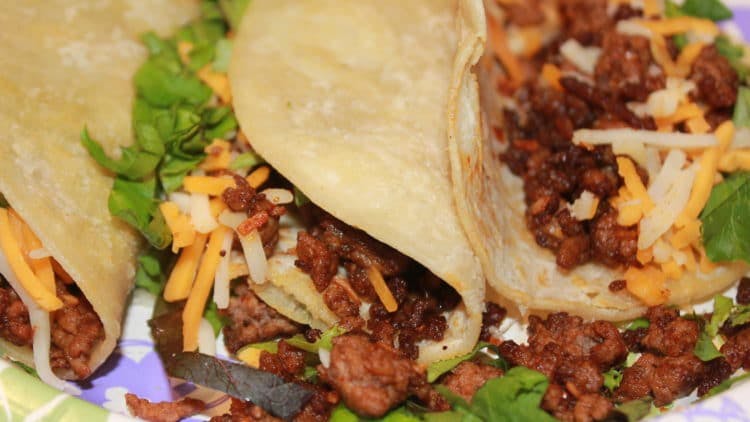 There’s something about tacos. They are magical food. Take an ordinary corn or flour tortilla, fry it just a bit, then fill it with whatever your heart desires. I’ve written about my quest to eat fish tacos at every place available in Juneau. I am still looking for suggestions, so please keep them coming. There’s just something about the simple taco that is epicurean perfection.

I found such a delight at the International Food Bloggers Conference (IFBC) in July. I have referred to this event a few times because it has provided several sparks of tasty intrigue that resulted in deliciousness. The second night of the event is a big gala that features local favorites and new products. There were wines, breads, fruits, and a few fun new product introductions such as Lindsay olive skewers. You can actually buy small skewers with olives, pickles and other fun things to put in your martinis or favorite cocktail. This definitely topped my list, as did the peach caprese salad, which I wrote about in my August 10 Capital City Weekly column. The one thing I can’t get out of my mind, and I constantly tell everyone about, is a simple taco.

Jimboy’s taco to be precise. Now, this is just an ordinary taco. Ground meat that has been seasoned, cheese and lettuce, all stuffed into a corn tortilla, which is lightly fried to give it a little crisp. I politely took one bite and then another and another, until within minutes I had gleefully consumed the whole thing. I couldn’t help myself. Of course, I started asking questions. What made the taco so good? The meat didn’t seem like anything extraordinary. The lettuce was shredded, but again nothing outrageous. And the cheese? Was it the cheddar cheese inside? NO. It was a different cheese. It was the Parmesan cheese on the outside of the shell. Cheese on the outside? This is madness, delicious madness! Crispy, salty, flavorful madness. And, oh so simple.

They were making them fresh at a food truck located outside the building, and some lucky fella was carrying a tray of aromatic, Parmesan crusted tacos through the hall. I didn’t want to follow him, as that might have been a little over the top, and I was eager avoid a stalker citation, as I truly did plan to attend the rest of the conference. However, I firmly planted myself at their table and waited for the fresh ones to arrive. I might need to confess that I became a glut and ate I think four of them. Five, if you count the veggie one.

For the following two days I dreamed of these tacos. I asked everyone where I could get them and was heartbroken to find out that there wasn’t a location near our hotel. The taco deities did smile upon me, though. My new friend Barbara, also a big fan of food, offered to pick me up on Sunday and get me to the airport. She even brought me a Jimboy’s for the road. Now that is true friendship.

I returned home with memories of delicious farm to fork dishes, wines, and tacos. Especially the tacos. I may have become a tiny bit obsessed with them. I even went to their website to figure out what made them so special. There’s a great video about the history of the restaurant and the family that owns it.

Last night I decided to deal with my craving for them and made my own. Although I will never be able to perfect the taco, I think I came pretty darned close. At least close enough to hold me over until my next visit to Sacramento.

This week I present a recipe that is ridiculously easy and wonderfully appetizing: Midgi’s Not-Quite-Jimboy’s-Tacos. It’s all about the cheese.

IFBC has opened my eyes to an array of great writing tools, blogging techniques, and of course delicious food. I look forward to the event each year and cannot wait to attend in 2017. Hopefully my pal Barbara will meet me at the airport with a Jimboy’s taco in hand.

12 white corn tortillas (I used the smaller ones)

Brown meat in skillet, add taco seasoning and stir well. Add a tiny bit of water to prevent the meat from getting dry.

Heat a griddle pan to medium high. Drizzle oil on griddle and place tortillas in hot pan. Sear until slightly brown and carefully flip. Continue cooking about a minute and sprinkle with parmesan cheese.

NOTE: The parmesan should be on the outside of the shell. That’s what makes it so good. I strongly encourage licking your fingers.