Meals with Midgi: Four Seasons Ghostbusters – A Treat to Remember 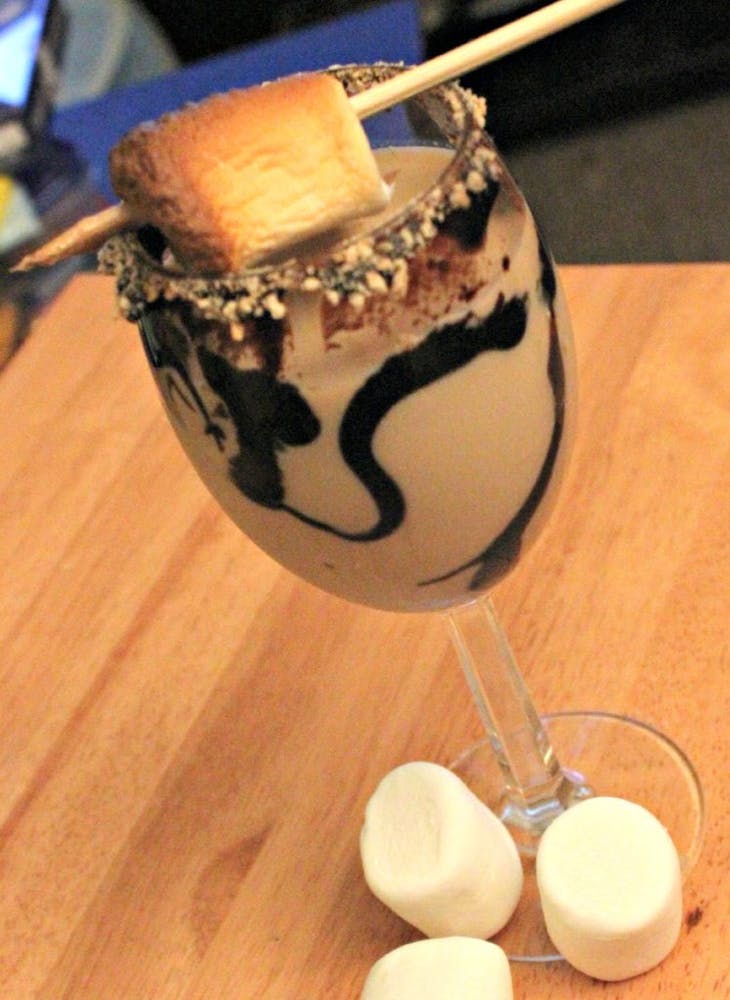 Although Halloween has passed, this drink will stay in my memory for a long time. This column was written a few months ago, but as I have another chocolate martini, I felt it appropriate to share.

Halloween doesn’t hold the excitement for me that it does for many. My children are grown and we don’t get the trick-or-treaters at our place.  I have to say that I do miss the darling princesses, handsome superheroes, and the creative costumes such as the one year when every kid in a particular family was dressed as a member of KISS.

This year I happened to be out of town for Halloween and missed out on the adorableness of three-year-olds trying to remember how to say “trick or treat”, as well as “thank you.”  It’s a fun evening for certain.  No, I didn’t get to participate in the annual All Hallows Eve activities. I was on a plane, bound for Santa Barbara, California with no regrets whatsoever. I was traveling with friends and colleagues to a media event at which I had the opportunity to network with dozens of travel writers.  To say I was excited is an understatement. I was actually rather nervous.

Upon our arrival to our hotel, we checked into our prospective rooms and decided to have a nightcap in the lounge. It’s at this point in my story I should mention that we were fortunate enough to be staying at the Four Seasons.  Yes, THE FOUR SEASONS.  I cannot remember another time in my life when I stayed in a place so beautiful, so decadent, and so luxurious.

Given that it was Halloween, I thought it would be fun to have a chocolate martini. I had wanted one for a while. To use my favorite Arnettism, it “flung a craving on me.”  I expressed my desire for said cocktail to our very polite server, Patrick. He said I was in luck. They happened to have a specialty drink for the evening called a Ghostbuster. I emphatically declared I must have it.

The cocktail was as beautiful and fun in presentation as it was tasty.  Being the avid social media gal that I am, I took a photo and tweeted it with a shout out to the Four Seasons.  This is when things got really cool. The folks at Four Seasons favorited my tweet, shared it, and then tweeted me back with the recipe.  For a small town girl such as myself, this was quite a treat.

As soon as I arrived home, I scurried to the store and purchased the needed items to make my Four Seasons cocktail at home.  They are available at most liquor stores and the hazelnut syrup is found in the coffee aisle.

This week I present a decadent cocktail that is delicious and easy to make.  I would like to add that everyone at the Four Seasons was extraordinarily polite and their customer service was beyond anything I have ever known.  I look forward to next year when I return to the media event. Until that time, I will have this cocktail and remember fondly that for just a few days I lived the life that I hope to someday become accustomed.  In the event that doesn’t happen, I will always have a delicious chocolate martini.

Combine vodka, chocolate liqueur, half-and-half, and hazelnut syrup in shaker with some ice.  Shake well.  Drizzle chocolate syrup on rim of wine or martini glass and dip in crushed graham cracker.   Strain drink into glass and top with toasted marshmallow.

I toasted the marshmallow in the oven set on broil for about 30 seconds.